Renegade dog caught – That’s one down and two to go… 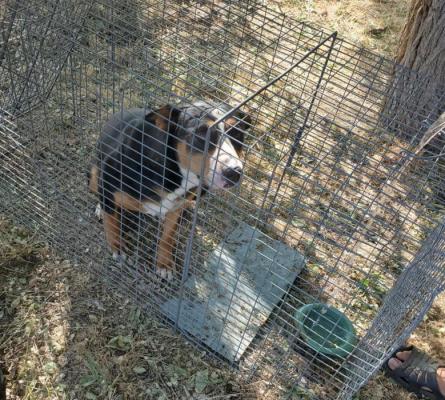 One of three renegade dogs has finally been caught and caged.  The animals were running in a pack around Carson City and were up to no good.  The band of canines attacked a number of deer that were grazing at the Lone Mountain Cemetery.  Several deer were wounded – one died.

The above dog was was trapped by Tribal Animal Control and is holding it until the Nevada Humane Society can pick it up and take it to their facility.  That leaves two, and possibly three others “out there.”  Law Enforcement reports they’re confident they know the comings and goings of the remaining “outlaws” and that they’ll be rounded up shortly.

Sheriff Ken Furlong gave credit to the partnership of Tribal Animal Control, Nevada Humane Society and the Sheriff’s Office for reducing the threat to Carson City area wildlife as well as domestic animals.