Family comes home to a house that smells of natural gas…

5:40pm – Residents of a home at 3331 Berkenfield Drive opened their front door and were hit with the pungent odor of natural gas.  The family retreated and called 9-1-1.  Carson City Fire-Rescue is headed to the scene with notification to the gas company.

5:49pm.  CCFD firefighters have shut off the natural gas line.  Waiting for the gas company.  Most firefighters are returning to base.

From:  The American West Heritage Center –

It’s been a wild first two weeks of 2021, but we’re standing strong at The America West Heritage Center for our wild horses and burros. We’re a few days away from a new Administration and our team has been pushing forward with our plan of action to protect America’s wild free-roaming horses and burros from mass roundups and slaughter.

Just this week, AWHC submitted its First 100 Days Wild Horse Agenda to the Biden Administration with an urgent plea to reform the Bureau of Land Management’s (BLM’s) wild horse and burro management program, which is careening toward fiscal and animal welfare disaster.

Urgent action is necessary in light of the BLM’s plan to round up 90,000 wild horses and burros from public lands over the next five years, a move that would triple the number of horses maintained in off-range holding facilities while decimating wild herds at a cost to taxpayers of nearly $1 billion.

This agenda can set the stage for progress and reform of BLM’s inhumane practices. 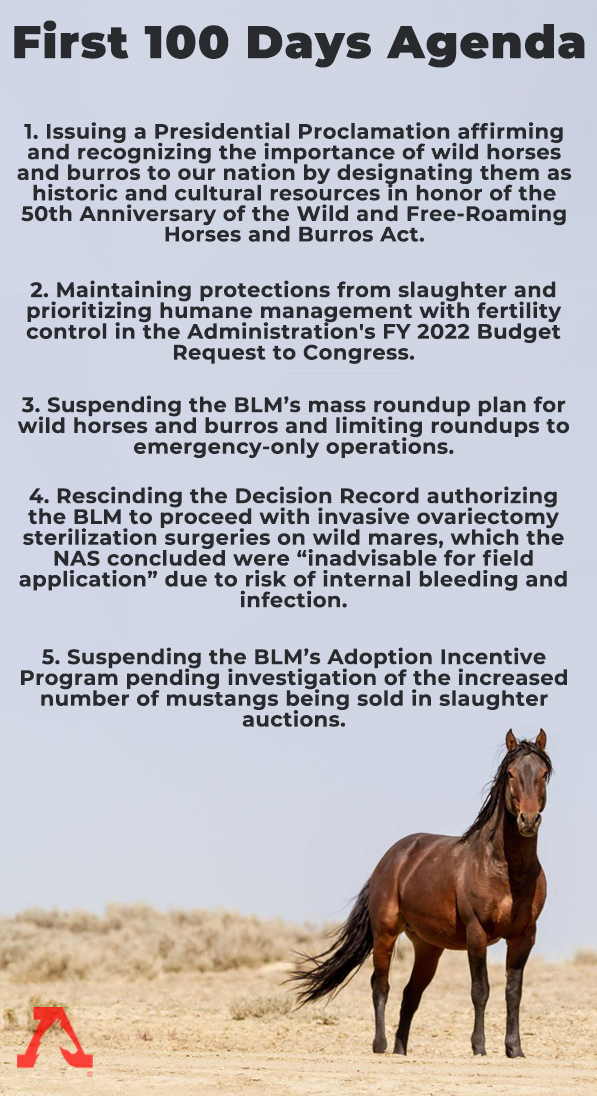 We’re hopeful that the new administration will take significant steps to rein in the BLM and its mistreatment of our nation’s wild horses and burros. By following our First 100 Days Agenda, the Biden Administration can take necessary first steps to finally granting these iconic animals the protection and humane management they deserve.

The last four years have been marked by an all-out assault on our public lands by the Interior Department under Secretary David Bernhardt and the illegally-serving BLM Director William Perry Pendley. America’s wild horses and burros have not escaped the destruction. Scapegoated for massive environmental damage to public lands caused by the livestock industry, these iconic animals face virtual extinction under the Bernhardt/Pendley Plan to cull wild herds by 70 percent.

And now, in a parting shot, the outgoing Secretary has appointed a public lands rancher who views wild horses as a “protein source” to represent the public interest on the BLM Wild Horse and Burro Advisory Board. Read more about this corrupt appointment and AWHC’s vow to fight it here.

Last month, the Sacramento Bee published a one-sided story on the Devil’s Garden wild horse herd, which gave a megaphone to ranchers who want the land where the horses roam for their cattle. The article dismissed wild horse advocates as having a romanticized view of wild horses, who the author believes are better off captured and fed in pens than living free in the wild. On Saturday, the newspaper published AWHC’s response in an OpEd entitled, “How to fix federal mismanagement of California’s wild horse population.” Read the article here.

AWHC continues to fight the mismanagement of the Devil’s Garden wild horses by the U.S. Forest Service, which recently announced that it was selling all wild horses captured in a fall 2020 roundup for $25 a piece. Previous sales of captured Devil’s Garden wild horses have resulted in many disasters, including the escape of two untamed mustangs who are still at large in Pennsylvania, the deaths of 9 horses from salmonella poisoning after being shipped to Florida, and 18 horses delivered to a remote Colorado property that can be inaccessible during the winter months.

Meanwhile, the Forest Service continues to charge ahead with roundups as its main management tool and declined AWHC’s previous offer to fund a pilot fertility control program for this herd, which is California’s largest and most significant wild horse population.

Another massive wild horse roundup is underway, this one in the BLM’s Eagle Complex in eastern Nevada. AWHC’s observer is on site to document this capture operation that aims to remove over 1,000 wild horses and reduce the population to just 139-265 in this 743,000-acre habitat area — that equates to as little as one horse per every 5,345 acres!  The BLM is clearing the land of wild horses so that thousands of cattle and sheep can continue to graze this public lands area.

As with any roundup, the scenes we’re witnessing are truly heartbreaking. As of Jan. 15, 412 wild horses have lost their freedom in the Eagle Complex roundup and five have lost their lives.

The last four years have been marked by an all-out assault on our public lands by the Interior Department under Secretary David Bernhardt and the illegally-serving BLM Director William Perry Pendley. America’s wild horses and burros have not escaped the destruction. Scapegoated for massive environmental damage to public lands caused by the livestock industry, these iconic animals face virtual extinction under the Bernhardt/Pendley Plan to cull wild herds by 70 percent.

And now, in a parting shot, the outgoing Secretary has appointed a public lands rancher who views wild horses as a “protein source” to represent the public interest on the BLM Wild Horse and Burro Advisory Board. Read more about this corrupt appointment and AWHC’s vow to fight it here.

As with any roundup, the scenes we’re witnessing are truly heartbreaking. As of Jan. 15, 412 wild horses have lost their freedom in the Eagle Complex roundup and five have lost their lives.

Below Are Photos Our Observer Took During Eagle Complex Roundup: 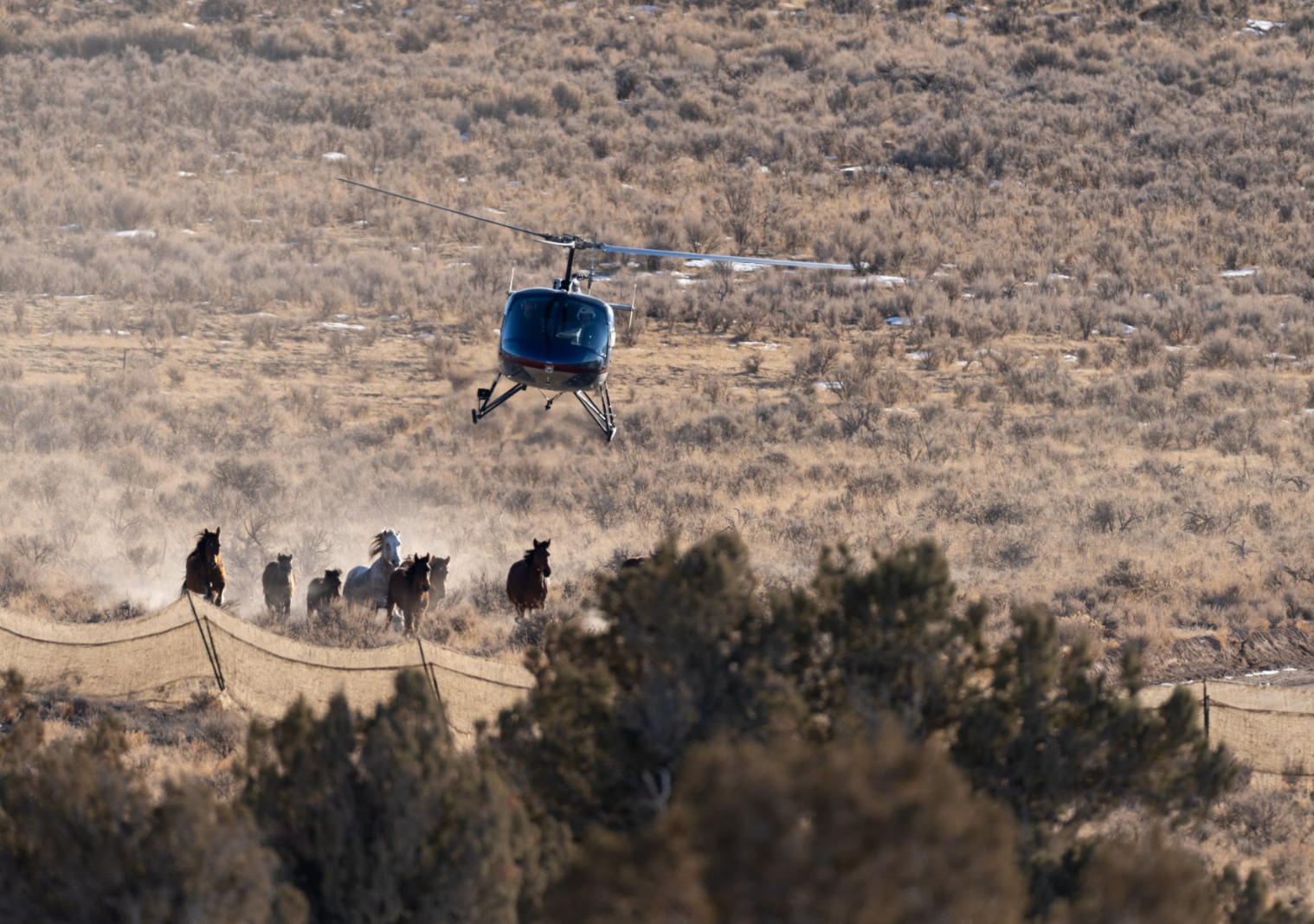 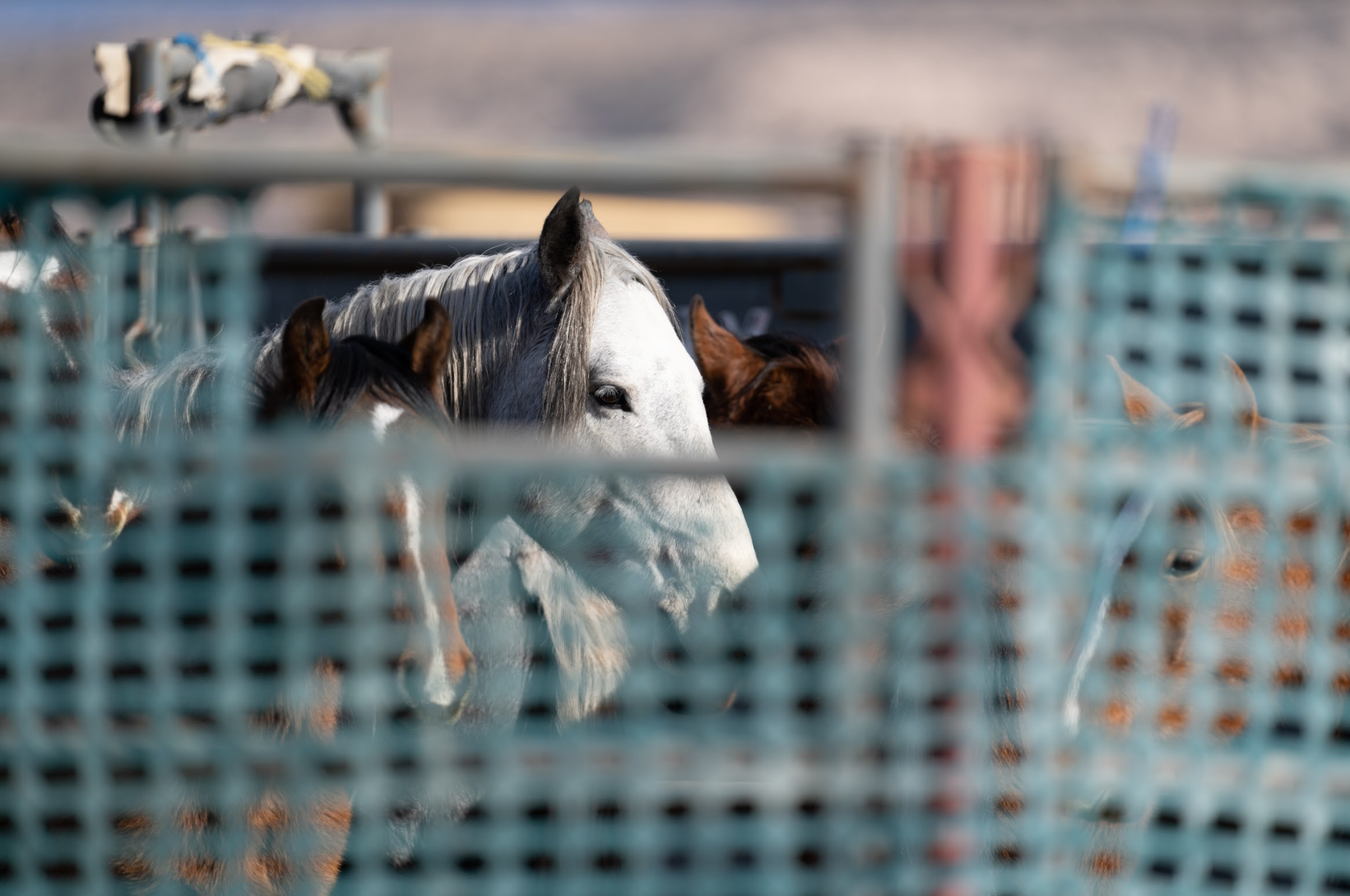 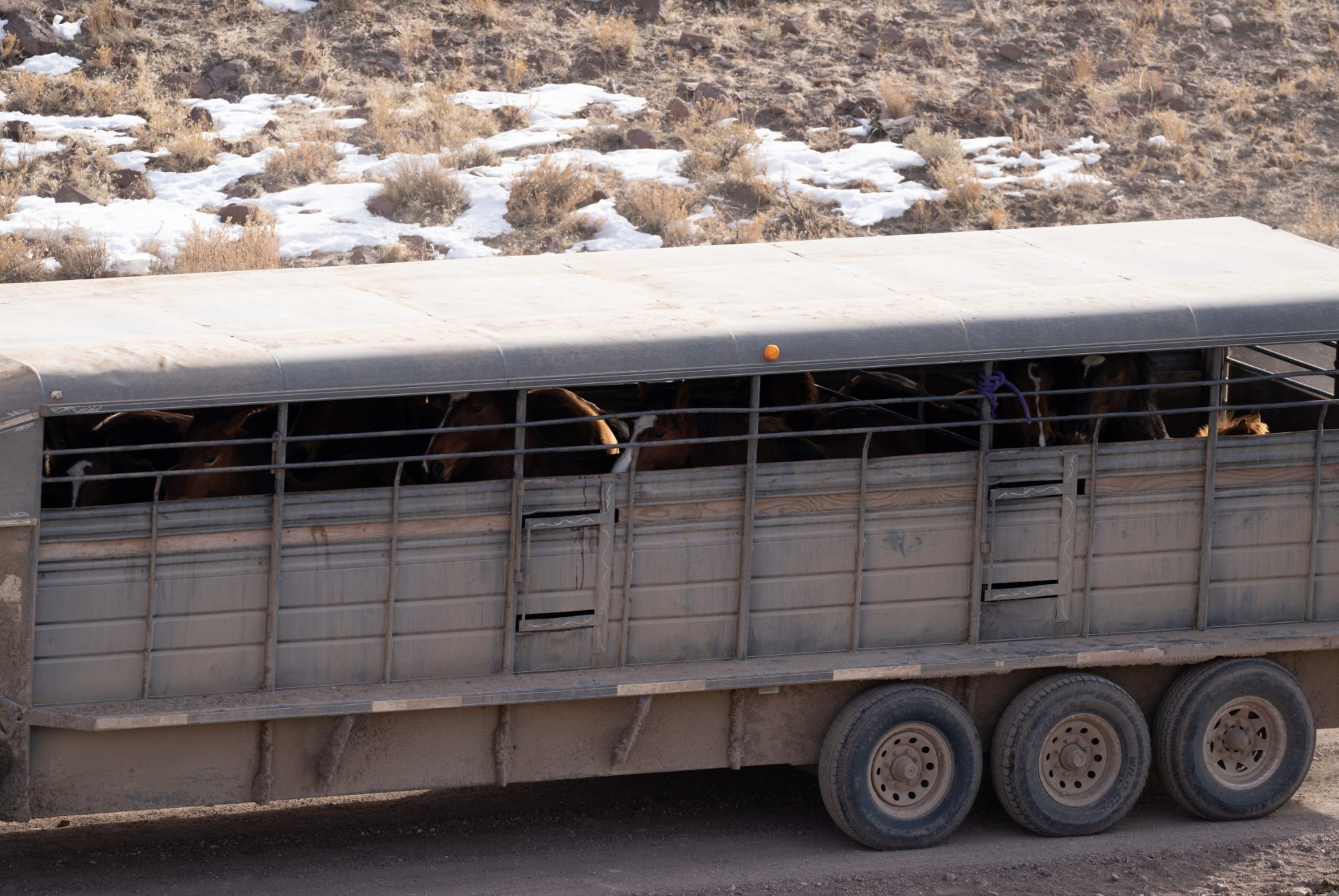 We are working hard to change this — in Congress, in the courts and in the field by showing that humane management works. We need YOU more than ever to keep showing up, speaking up, and supporting our work. Together, we will do everything in our power to protect America’s wild horses.

The Stewart Indian School Cultural Center & Museum is reopening to the public on Tuesday, January 19th at 1 Jacobsen Way – Hours are 10 to 5pm.  Closed Weekends.

“We are excited to reopen to the public and share our wonderful exhibitions,” said Bobbi Rahder, Museum Director. “We are following Governor Sisolak’s directive of requiring face coverings, use of hand sanitizer, and social distancing. We want our visitors, volunteers, and staff to stay safe and healthy.”

In addition, the museum has produced Stewart memorabilia for sale as a fundraiser, to replace state budget cuts. The museum has a list of items such as t-shirts, hoodies, cups, water bottles, lanyards, tote bags, and ornaments for sale. Please CLICK HERE to see the price list.

Items can be purchased through cash or check, but not by credit card.

The museum’s hours are Monday through Friday, 10 am to 5 pm; closed on weekends and state and federal holidays. The museum is not conducting any group tours at this time.

We are pleased to announce that Stewart Indian School Cultural Center & Museum has been awarded a WESTAF Regional Arts Resilience Fund grant award in the amount of $74,000. This was a highly competitive process, during a very challenging time. The individuals involved in the selection process recognized the crucial role our organization plays in our community and for the larger field—regionally and nationally. This grant is made possible through support from the Andrew W. Mellon Foundation.

In addition to this WESTAF grant, our museum has received:
WESTAF CARES Act Grant of $20,000
Nevada Humanities Council grant of $7,500
Jan Leonard and family donation of $50,000
Sandy and Nathan Miller donation of $15,000
Jennifer Webley Foundation donation of $20,000

Traffic Crash at Stewart and Washington – In the intersection

10:02am. Report of a two car smash-up at Washington and Stewart.  One vehicle ran a red light, according to reports from the scene.   Watch for emergency vehicles.

Have you seen these teen agers – Both ran away from home…

The Carson City Sheriff’s Office is requesting assistance with locating two runaway juveniles.  On December 31, 2020 Keith Smith and Corey Del Rosario ran away from a home in Carson City.  Keith and Corey do not have any medical problems and are not considered at risk.

Keith Smith is 16 years-old 5’08” / 140 pounds with brown hair and brown eyes. Keith was last seen wearing a white sweater and white jeans.  Keith has a cross tattoo on the right side of his neck and a tattoo of praying hands on the left side of his neck.  Keith is from the Reno area.

Corey Del Rosario is 15 years-old 5″07″ / 170 pounds with brown hair and brown eyes.  Corey was last seen wearing a black sweater and blue jeans. Corey does not have any tattoos.

Two people in a Toyota Prius drove through the east doors of Sportsman’s Warehouse this morning. There were several injuries in the car and on the floor of the store. No fatalities but one individual was Careflighted to Renown in Reno.

The accident may have been the result of the lady driving having a medical issue. She drove the Prius eastbound on Wright Way, across Stewart, hitting a curb causing oil to spew out from under the car. The car proceeded westerly and smashed through the east doors of the building. It covered a lot store area before coming to a rest. Possibly three customers in the store were involved – but again, it doesn’t appear anyone suffered fatal injuries.

Injured person loaded aboard Careflight enroute to Renown in Reno.

Prius is mostly fiberglass in front but engine likely damaged.