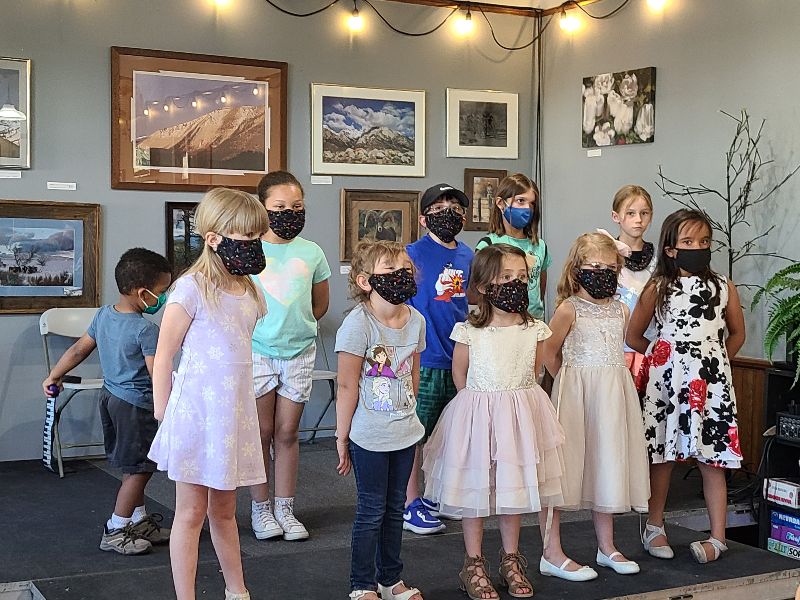 Bicyclist down on the pavement – Medical Parkway

10:08am  A bicyclist has crashed on Medical Parkway, just west of the gas station.  The person is on the ground.

Nothing Sweeter Than a Joyful Noise!!

Powers said, “Each rehearsal will develop students’ musical skills, strong singing voices, and joy in music.” I am so excited about beginning a new season of singing and playing, creating music, and making new friends!”

Tuition for the semester is free. Parents are encouraged to join the Carson City Symphony Association to help offset the cost of music, supplies, insurance, instructor’s stipend, and more.

Joyful Noise Carson Children’s Choir, an educational program of the Carson City Symphony Association, was founded by Nancy Jones in 2017 and has been directed by Michelle Powers since fall of 2019. It is supported in part by public funds through a grant from the Nevada Arts Council and the National Endowment for the Arts and by private donations.

For more information and registration form, contact director Michelle Powers at 775-720-1916 or mrees@nevada.unr.edu.

Carson City, NV – Today, Nevada Attorney General Aaron D. Ford is pleased to announce that the Nevada Board of Examiners approved the award of compensation for Frank Lapena, following the Eighth Judicial District Court’s grant of a Certificate of Innocence and court approval for a total award of $1,980,900.00 from the State of Nevada as compensation for the 20 years Lapena spent in prison after his wrongful conviction. Eighth Judicial District Court Judge Gloria Sturman entered stipulated orders on June 30, 2021, which AG Ford fully supported.

“Today, Mr. Lapena’s innocence was fully acknowledged by the State, and he is free to enter into a new chapter in his life,” said AG Ford. “No amount of money can ever replace our freedom, but with this decision, Mr. Lapena will receive some redress for the years he has lost. As attorney general, it is my job to pursue justice, and I would like to thank the members of my office who worked vigorously on this case.

In 1974, Lapena was arrested for the murder and robbery of Hilda Krause, wife of casino magnate Marvin Krause. Lapena and his former girlfriend were named as the masterminds by the actual murderer, Gerald Weakland. Weakland then changed his testimony at Lapena’s first trial and testified that Lapena was innocent but changed his testimony again at Lapena’s second trial. Lapena was nevertheless convicted in 1977 by the State of Nevada of First-Degree Murder and Robbery with Use of Weapon in Commission of a Crime.

In 2019, the Nevada Legislature adopted Assembly Bill 267, later amended by AB 104 (2021) – codified in NRS 41.900 et seq. – to compensate persons who have been wrongfully incarcerated if they can prove, by a preponderance of the evidence, that they did not commit the crime for which they were convicted, were not an accomplice, and did not otherwise cause their own conviction. Additional costs, including reasonable attorney fees, educational expenses, counseling services and certain other reimbursements are also permitted. Lapena is the fifth person in Nevada to receive a Certificate of Innocence under this new statute.

On August 8, at approximately 3:30 p.m. in the area of College Parkway and Airport Road, calls from citizens reported a dark colored SUV had crashed, rolled over and the driver was ejected. Nevada Highway Patrol and Carson City Sheriff’s Officers responded along with Carson City Fire Department.

A 61-year-old male had been ejected and was found on the roadway. The male was transported by Care Flight. Witnesses indicated that a silver-colored SUV was seen leaving the area at the time of the crash. The silver-colored SUV is believed to be a 2011-2014 Jeep Cherokee.

If you have any information regarding this crash or witnessed the events leading up to the crash, you are encouraged to call the Carson City Sheriff’s Office, Deputy Joe Trotter #T494 at 887-2020, extension #45494.

Smoke rising on “C” Hill – Firefighters enroute to check it out…

10:27pm  Report of smoke rising up from an area near C-Hill.  Firefighters are enroute to check it out.

10:29pm  Reports now say that there are flames and smoke north of the “C and Flag” area of C-Hill.

10;32pm  Reports from neighbors say they still see smoke but no flames.

10:41pm  Reports from the area where the light and smoke was coming from – there is no fire up there and there is no smoke.  The light is coming from lanterns being carried by hikers up there.  No fire.  No smoke.

Picture of children walking to school.

Carson City kids will be starting school soon.  Starting next week, August 16th, the Carson City Sheriff’s Office patrols will be working with an organization called Western Nevada Safe Routes to School and will keep up the patrols throughout the school year.  They’ll be reminding drivers as well as pedestrians (young and old) to be extremely careful when walking or driving through school zones.

Last, but not least, please remember ALL school zones in Carson City are 15 mph.  And if you violate that speed limit and you get a ticket, it’s going take a big chunk out of your Christmas shopping

Time To Get Your Chugger On!!

V&T Railroad
Crankin’ it back up Saturday, August 28th, 10am. Runs through October 31st. Tickets for sale at VTRailway.com

It’s been a year and a half since the last trip was made by the V&T Railroad.  But despite the continued explosion of the Covid-19 “plus” Delta variant the V&T Railroad officianados are going to fire the old train right back up and get back down to business.  Those who run the train say they’ll re-install roundtrip rides from Carson City to Virginia City starting Saturday, August 28th, departing at 10 a.m. The shortened season kick-off will be launched with a ceremony and festivities at Eastgate Depot in Carson City launching regular Saturday and Sunday trips through October 31, followed by the return of the Polar Express just in time for the Christmas holiday season.

Tickets are now on sale for regular season trains only at VTRailway.com.